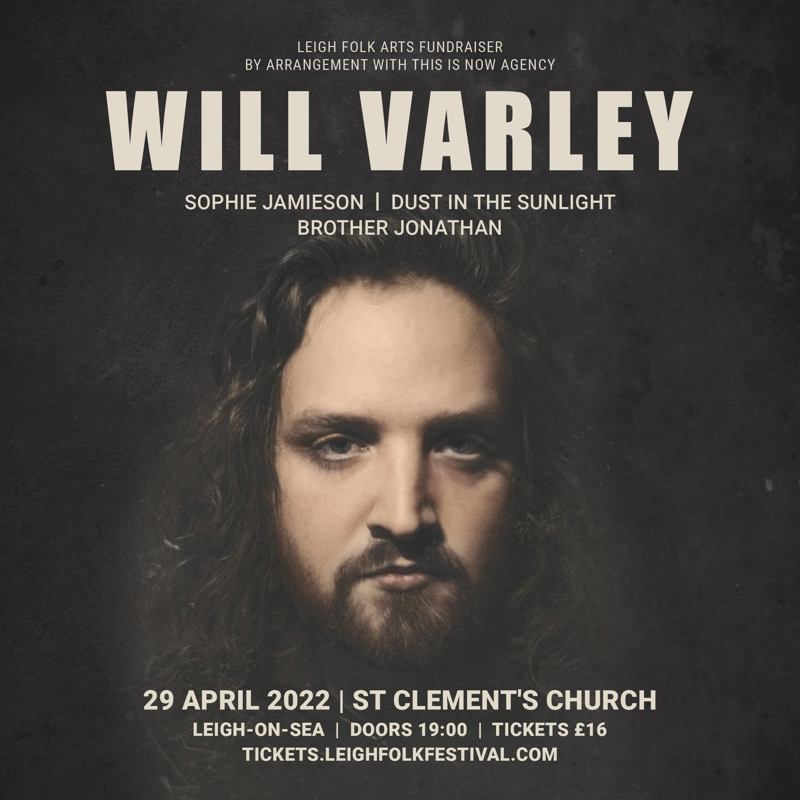 Will Varley + Sophie Jamieson + Dust in the Sunlight + Brother Jonathan

Unreserved seating £16.00
Entry Requirements: Children aged 15 and under must be accompanied by an adult aged 18 or over

Will Varley is set to perform against the beautiful backdrop of the historic St Clement’s Church, Leigh, on Friday 29 April as part of a fundraising concert for Leigh Folk Arts.

Varley has just been awarded Fatea Magazine’s Artist of the Year 2021, and his Leigh Folk Arts show is off-the-back of his sixth studio album “The Whole Around My Head” released in 2021 described by Folk Radio as ‘Channelling Dylan at his most poetic, metaphoric and meditative’.

With sold-out appearances at London’s Bush Hall and Union Chapel - the ship-hull-shaped domes of the 600-year old St Clement’s church provide the perfect backdrop for this special performance.

Will has supported the likes of Billy Bragg, Frank Turner, Valerie June and The Proclaimers and he's sold-out headline shows in cities as far afield as Berlin, Zurich, Amsterdam and Vienna. High praise from the likes of Tim Minchin and Simon Nicol of Fairport Convention has helped fan the flames, as his audience continues to grow both on the road and online. His self-made music videos have clocked up millions of views on YouTube and the song 'Seize The Night' is fast approaching eight million streams on Spotify.

This is a rescheduled event due to Covid-19, from June 2020. Tickets will automatically be carried over to the new date. If you previously bought tickets you will be automatically reissued new tickets for this date. Leigh Folk Arts is a registered charity, all profits from this event will go towards supporting future arts and community events and activities.

Dust in the Sunlight