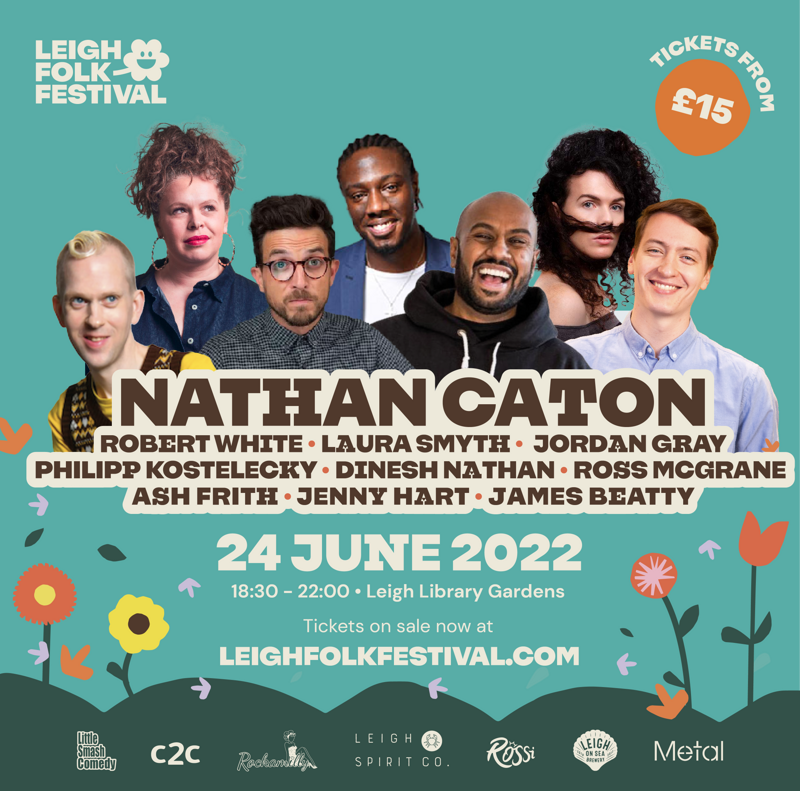 Limited unreserved seating tickets are available. General admission ticket holders are advised to bring picnic blankets or chairs to sit on, no standing is allowed.

After the success of Friday night comedy, at last year's Garden Gatherings where 300+ people enjoyed an evening of the finest stand up comedy, Little Smash Comedy returns to Leigh Library Gardens in 2022 to present an evening of open-air side-splitting stand-up for Leigh Folk Festival.

|| 𝐍𝐚𝐭𝐡𝐚𝐧 𝐂𝐚𝐭𝐨𝐧 || (Live At The Apollo, Mock The Week, Russell Howard’s Good News) Nathan Caton is one of the most exciting young comedians on the scene. Gigging since the tender age of 19, over the last decade he has established himself both as a circuit headliner, and a name on TV and radio.

Within his first few years on stage, he had picked up various accolades and coveted plaudits including the Chortle Student Comic of the Year award and Broadcast Hotshot and written and starred in a pilot for Paramount Comedy (now Comedy Central) entitled The Nathan Caton Show.

Since then Caton has gone from strength to strength, wowing audiences at comedy clubs up and down the UK, and on his numerous TV and radio appearances, with his delightfully charming blend of personal and political comedy.

|| 𝐑𝐨𝐛𝐞𝐫𝐭 𝐖𝐡𝐢𝐭𝐞 || (Britain's Got Talent) Robert White is one of a kind. You may recognise him from Britain’s Got Talent 2018 where he finished runner up after wooing the nation with his randomly unique musical act. Known for his brilliant timing and performance style, Robert’s chaotic stage presence, improvisational skills and delivery won him the 2010 Malcolm Hardee Award for Comic Originality. In the same year, he wrote one of Dave’s Top Ten Jokes of The Fringe. Gags aplenty and a unique outlook on life make him a superb, consistently funny and inventive comedian.

|| 𝐋𝐚𝐮𝐫𝐚 𝐒𝐦𝐲𝐭𝐡 || (Jonathan Ross’ Comedy Club) Laura Smyth is making waves on the comedy scene, this working-class east Londoner won the funny women awards in 2019 only 5 months after her first-ever stand-up gig. Steve Bennett described her as ‘a real force-of-nature' and he wasn’t wrong.

Laura made her comedy TV debut on Jonathan Ross’ Comedy Club for itv last autumn, since then she has appeared Yesterday, Tomorrow and the Day Before for Comedy Central and As Yet Untitled for Dave. Laura performed at Latitude Festival last July and did her first-hour work in progress show at Leicester Comedy Festival in February over zoom.

A prolific writer, Laura is working on her first script commission with Sam Leifer and Caroline Leddy for the BBC. She's also just shot her first acting role in the independent feature film Cottontail.

|| 𝐃𝐢𝐧𝐞𝐬𝐡 𝐍𝐚𝐭𝐡𝐚𝐧 || Dinesh Nathan has been making waves on the South East Comedy scene, winning South Coast Comedian Of The Year in 2019. A very likeable and promising act.

“Nathan is a class act.” Chortle

“His confident, straight-faced delivery and outstanding material left (us) wanting more. He is one to watch” Fringe Review

|| 𝐑𝐨𝐬𝐬 𝐌𝐜𝐆𝐫𝐚𝐧𝐞 || (Radio Essex, Little Smash Comedy) Ross McGrane is a Comedian & Radio Presenter from Essex. He is the current official tour support for Russell Kane and presenter for Radio Essex. Ross performs all over the UK in some of the country's most prestigious venues, opened for industry heavyweights such as Jo Brand, Russell Kane, Sean Walsh & Andy Parsons and regularly hosts and runs his own brand of live comedy; Little Smash Comedy in Essex.